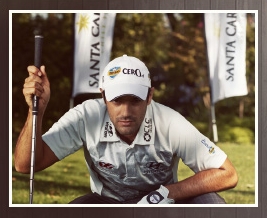 Viña Santa Carolina are delighted to welcome Benjamin Alvarado, the first Chilean golfer to enter the PGA Tour, as its brand ambassador for 2014.

Viña Santa Carolina was also the official sponsor of the PGA web.com tour Chile Classic tournament held in March 6-9, 2014, at the Prince of Wales Country Club in Santiago where Benjamín participated along some of the best golfers in the circuit.

Benjamin is a perfect representative of Santa Carolina’s innovative spirit and Chilean Heritage.

Ampersand will be rolling our some promotions to coincide with the partnership over the coming months.