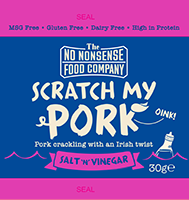 This summer Ampersand are delighted to add a new flavour, Salt & Vinegar to the Scratch My Pork range. Scratch My Pork is a pork crackling made from 100% Irish pork rind and is unique to the Irish snack market. Ampersand have been distributing the brand into retail outlets, pubs & off-licenses since they partnered with the No Nonsense Food Group in January last year.

The latest addition Salt & Vinegar will be available to consumers from mid-May as Ampersand launch the new SKU into stores to sell alongside the popular salted and smokey variants. 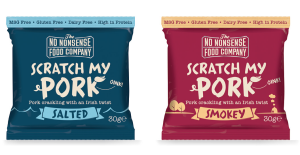 The Salt & Vinegar variant had received rave reviews in focus groups on both its flavour and packaging when it was proposed as a possible new add-on to the Scratch My Pork range. Its packaging is both colourful and vibrant and is similar to the existing two products within the range which instantly communicates the brand image and personality to consumers. The packet is also foil-packed to lock in all the flavour and freshness. 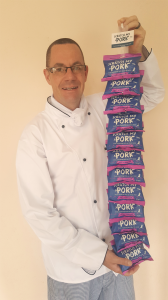 Creator, chef Matt Brownie states; “We are very excited that the new flavour will create more happy customers. The Salt & Vinegar flavour is also gluten & dairy free & high in protein, so we have kept the profile of our snack range open to most allergen & dietary snacking consumers.”

A teaser campaign has been running on the Scratch My Pork Facebook and Twitter pages to create excitement with consumers in advance of the new flavour’s arrival into stores.

Retailing at €2 and sold on clip strips of 12 to allow maximum awareness and sales potential in-store, Ampersand will also be running with a special trade promotion on Scratch to coincide with the launch of the new Salt & Vinegar flavour.